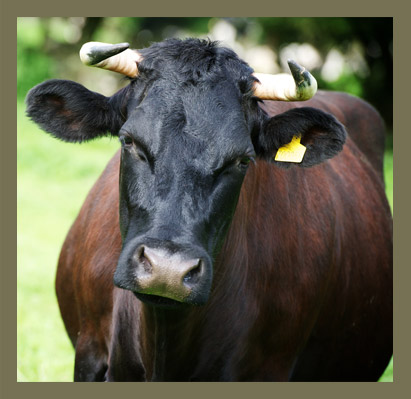 Church Farm is home to the Alsop Herd of Pedigree Gloucester Cattle, which are one of the rarest English cattle breeds with only 800 breeding females left in the country. They are an ancient breed, which were numerous in the Severn Vale from the 13th century, and whose milk was used to make the original Single and Double Gloucester cheese. They are a Dual Purpose animal; good milk providers and also provide fine lean beef and were also used in the past as draught oxon.

The breed almost died out in the early 1970’s being down to one major herd with only 70 females left. In 1973 the Gloucester Cattle Society was reformed and with the help of enthusiastic members, such as the late Joe Henson and the Rare Breeds Survival Trust, the breed was saved.

The Gloucester cow is strikingly beautiful with its upswept horns, dark mahogany body, black head and legs, white stripe along its back, white tail and underbelly. The cattle are docile and easy to handle. They are hardy, easy calvers, excellent mothers and long lasting. Several of the herd have calved well into their mid to late teens with no problems.

The Alsop Herd of Pedigree Gloucester Cattle was founded in 1988 with the purchase of 4 cattle from the dispersal of the Walton herd. The 12 strong herd now consists of 9 Cows and Heifers plus followers. The herd runs with a stock bull, currently Alsop Hector.

The cows spend their summer grazing on the limestone grasslands and in the winter are housed in a light airy modern barn.

We often have animals for sale. Please call for more information on the Alsop Herd. 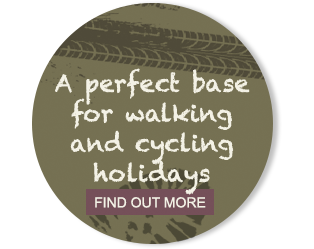 Take a look at
Our Cottages

Cookies: We use cookies to give you the best experience on our website. This includes cookies from Google Analytics and third party social media websites if you visit a page which contains embedded content. Cookies are disabled by default until you choose to accept them. You may change your preferences at any time.
Accept
Read more